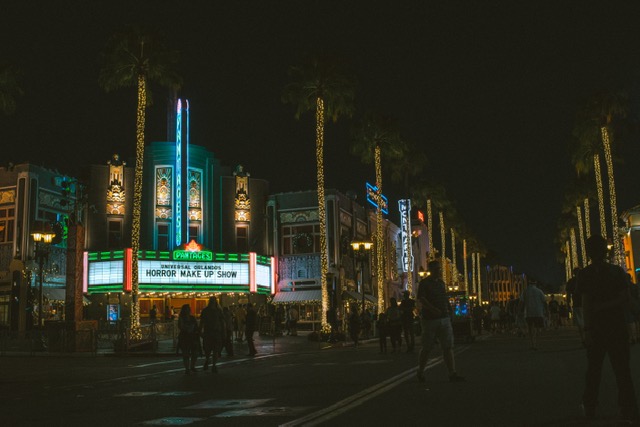 When I turned 30, Chase and I went on a small birthday trip to Universal Studios and Islands of Adventure in Orlando, FL. Well, we paid admission to those parks, but my main reason for going was to submerge myself in The Wizarding World of Harry Potter.

I have what some people would call an *obsession* with Harry Potter. Those people would be right. Although my respect for JK Rowling was avada kadavra’d by her transphobic stance, my love for Harry and the wizarding world remains strong. The books and movies have been a comfort to me for years. When I’ve had a particularly rough day, or when I’m struggling with a lot of anxiety, or when it’s cold and rainy outside, or on days that end with Y, I’ll turn on one of the movies or I’ll crack open one of the books, and I am almost instantly soothed. I have a tattoo of the Elder Wand. I named my dog Lily Pawter. I have a whole area of my sunroom with HP merch and books and art which, now that I think of it, kind of looks like a shrine. Hmm. My son’s first birthday was Harry Potter themed (The Chosen ONE). I could go on, but you get the idea.

As an aside, I think that many people have their own interests (or obsessions), and honestly, it could be hard drugs. But it’s not. It’s Harry Potter. So get off my back, MOM!! (Totally kidding, my mom supports my habit and bought me a Ravenclaw cloak. Some might call her an “enabler”.) Anyway…

It’s my 30th birthday, and Chase and I go to Disney Springs for dinner and drinks. We’re “responsible” adults, so we get an Uber. When the Uber gets to our Airbnb, we’re waiting outside in the humid Orlando night.

Our Uber driver is named Luis, and he seems to be in his early forties. Luis speaks broken English, but Chase is always very chatty with Uber drivers, so we strike up a conversation. We tell Luis that it’s my 30th birthday and that we drove down from Georgia to celebrate it here for the weekend. Luis asks little details about our lives – how long we’ve been married, if we have kids, what we plan on doing while we’re in Orlando, and so on.

“What about you?” asks Chase. “Are you married? Have any kids?”

“Oh, yes, I am married. I have a daughter who is 19 and a son who is 8. My daughter lives here in the States, but my son is back in Venezuela with my wife.”

“I do. I came to America to try to make money to bring my family here. It is very bad in my country right now.”

“Do you get to speak to them often?” Chase asks.

“Sometimes, but not as much as I want,” Luis responds.

“That must be so hard for you,” I commiserate.

Luis gives me a sad smile in the rearview mirror. “It’s okay. I love it here, and soon my family will be able to be here with me.”

I look down at my phone and Google “Venezuela current events”. I’m ashamed to say that I had no idea that there was any sort of unrest in the country. I’m so nearsighted that I rarely look into the issues of other countries unless they’re thrown in my face. I’m immediately taken aback by what I read.

I look up from my phone and then over at my husband. I think about how lucky we are to be together, here, now. I think about how comfortable I feel leaving my son with his aunt while we’re 5 hours away. I try to imagine being separated from either one of them because of turmoil in our country. I can’t even imagine it.

Luis has such a positive outlook, despite the utter unknown he lives through every day. Will his wife and son run out of food? Will they need healthcare they can’t afford? How long until Luis can raise enough money to bring them here? Will they ever make it to our country? Will our country be safe enough for them? Will our country even let them in? How many people are in the same situation as Luis?

I think about these things, and I just feel gross. That’s the only way to explain it. Luis is fighting for the safety and the unity of his family, and Chase and I are going to an amusement park full of manufactured happiness. It’s absolutely absurd. We’re so incredibly privileged and safe that we pay money to go to fantasy worlds because we’ve become bored or stressed out by our own. It’s wild. Does Luis ever feel bitter about driving Americans to these parks everyday, where we spend ridiculous amounts of money for the sake of fun while he’s scraping by to be reunited with his family? I know I would. Still, he looks at us with kindness.

I think we all walk around under the general assumption that we’re the main character in this life. There’s nothing wrong with this – we’re just in our own heads, making our own decisions, and living our own lives. But sometimes, something happens that makes you step outside of your own storyline and realize that we’re all supporting actors in each other’s lives. It’s not all about me. In fact, it’s not even a little bit about me. It’s a great, big world, and sometimes it’s good and healthy to gain a different perspective.

But this interaction with Luis shifted something inside of me. May I never take my time with my family for granted. May I always be grateful for manufactured happiness, but know that true joy only comes from things that are real.

You have reacted on "Manufactured Happiness" A few seconds ago