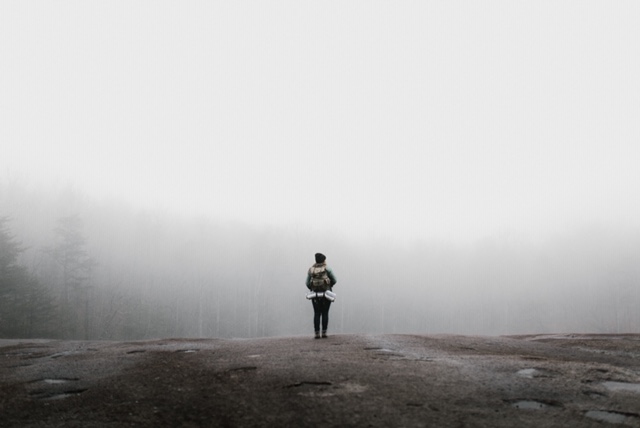 If you go to Google and type in “feeling lost”, you get 2,390,000,000 results. Nearly 2.4 billion articles, blogs, quizzes, and websites addressing the intensely visceral feeling of lostness. Clearly, this is a universal feeling, but somehow when it happens to us, we think that we’re the only ones experiencing it.

We think it means we’re on the wrong path.

We call it by different names.

Wandering in the Wilderness.

But it affects us all. In fact, I’m willing to bet that most of us feel lost more than we feel like we’ve got it all together. I hope so, at least.

Every once in a while we’ll have an epiphany or a revelation. By some divine intervention, we’ll hear the next right answer or be told the next right step. But, honestly, how often does that happen? Rarely.

This lostness has been around thousands of years. When Moses brought the Israelites out of slavery in Egypt, it took absolutely zero minutes before they started questioning everything. They saw the sea split in half so they could pass and still constantly were talking smack to Moses about bringing them into the Wilderness. They knew they were leaving lives of slavery and traveling to the Promised Land, but they still were so whiny and ungrateful and full of doubt. They constantly said to Moses, “Better you had left us in Egypt then to bring us out here to die.” All the while, God is raining manna down on their heads and bringing water forth from rock and talking to Moses on a mountain and leading them by signs in the sky. Still, though, they wandered the wilderness with an eyebrow cocked and their noses in the air.

We have a short memory, us humans. We are also remarkably self-absorbed. We think that we’re the only ones going through whatever we’re going through, or the only ones who have gone through whatever we went though. We forget all the ways it has turned out okay in the past and all of the ways that it can turn out okay in the future. The second that things don’t turn out the way we think they’ll turn out, we’re ready to abandon ship. We’d rather go back into slavery than see where the wilderness takes us.

And, more than anything else, we tend to forget that God is in the Wilderness.

God is in the Wilderness.

Yes, you may feel lost, but you really aren’t lost. You’re wandering, yes, but not lost. You’re exactly where you’re supposed to be. And who knows, maybe when all is said and done, you’ll have the privilege of knowing why you’ve been wandering for so long.

Keep watching and waiting and listening. As Glennon Doyle says, “Just do the next right thing.”

You aren’t wandering alone. Everyone around you has felt lost before or is feeling lost right now, too. Just because you feel stuck or stagnant or uncertain or adrift doesn’t mean you’re on the wrong path. It just means you’re human. Wonderfully human, with all of our impatience and doubts. Wonderfully human, and never alone.

You have reacted on "Feeling Lost" A few seconds ago

No info sharing or spam, promise.