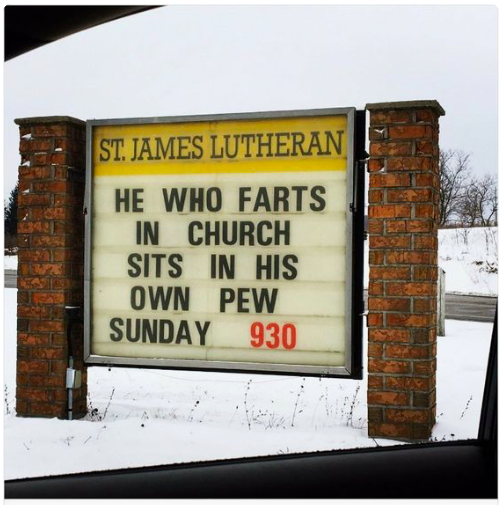 I have quite the fascination with church signs – especially church signs here in the south. There is quite a wide range down here, from basic signs that announce the times of each service (“9AM SUNDAY SCHOOL | 10AM WORSHIP”) to signs that basically screech hellfire and damnation (“TURN OR BURN”) to, my personal favorite, signs that read like dad jokes (“HE IS DIVINE, WE ARE DIBRANCHES”).

There is a church that my friend and I always laugh about, because all they put is the title of that week’s sermon. This might (or might not) be obvious to people who attend church, but to anyone else, it just looks like random words. “JESUS NOW” and “THE SHEEP” and “WHAT ABOUT SATURDAY?” Hilarious.

There’s also a church on the other side of town that just says “COME HEAR THE DEEPEST VOICE IN ALBANY”. I literally laugh out loud every time I pass it. I also want to go visit.

There is one church that always rubs me the wrong way, though.

This church is right down the road from my house so I have been reading these signs for over 3 years. When we first moved in, they had “MAKE AMERICA GREAT AGAIN” as their church sign for like a month. Now, I really don’t give a shit if they are republican or democrat or whatever, but 1. Don’t mix politics and religion and 2. Don’t try to sell Christianity by connecting it to Trump. Or Hillary or Bernie or Biden or anyone.

Since this is a church sign discussion and not political discussion, I won’t loiter on this topic but this left a bad taste in my mouth from the get-go.

I imagine a middle aged white pastor chuckling and looking over, shocked to see that Satan is standing next to him and chuckling as well.

I roll my eyes and keep driving. But coming back home later, I notice the other side… “DARWIN AND THE DEAD KNOW BETTER NOW”.

Now I know this doesn’t seem like a sign that would make me clutch my pearls, but let me tell you just why this pissed me off.

If we truly claim to know Christ, and we truly believe, as Christians, that those who don’t know Christ will forever be separated from God after they die (aka hell), why on earth would we make it a snide church sign? Christians should not be disparaging and condescending about this. This should be an absolute TRAGEDY, not some quip on a marquee. This should be the absolute worst.

Have I any pleasure in the death of the wicked, declares the Lord God, and not rather that he should turn from his way and live?
Ezekiel 18:23.

“[God] who desires all people to be saved and to come to the knowledge of the truth.”
1 Timothy 2:4

“The Lord is not slow to fulfill his promise as some count slowness, but is patient toward you, not wishing that any should perish, but that all should reach repentance.”
2 Peter 3:9

God is not an asshole.

I do think God has a sense of humor, but I don’t think it’s at the expense of others. And I don’t think that he totally LOLs at a church that proclaims to follow Jesus but then, in black and white, exalts itself by declaring that other humans who didn’t “know better now”.

This wins no one to the side of Love.

This isn’t the only church that I’ve seen that around here that puts up signs that are more likely to keep people out than bring them in. The last thing I think when I see these types of signs is that this place is a city on a hill and the salt of the earth. And you know what sucks? That’s not Jesus. Jesus sought out people like Darwin and “the dead”. Jesus hung out with them. Talked with them. Washed their feet. Made others drop their stones.

In the book of Luke, Jesus tells a story to those who “had great confidence in their own righteousness and scorned everyone else.” He talks about a Pharisee who goes to the temple and sees a tax collector. The Pharisee talks to “God” (I personally think he’s talking so others can hear him, not primarily to God) and says, essentially, “Thank you, Lord, that I am not like most sinners, and especially not this tax collector! I go to church and tithe and fast!” The tax collector, on the other hand, stands away from everyone. He doesn’t even look up, but asks God to have mercy on him. Jesus ends the story by saying that the tax collector, not the Pharisee, went home justified before God.

Jesus avoided and spoke against the hyper-religious and self-righteous. Jesus would have rolled his eyes at this crap too. Churches like this aren’t letting the people outside of its walls know about the amazing, earth-shattering, unconditional love of God and that is the real tragedy. Want to introduce people to Jesus? You can start by unsubscribing to the belief that you’re superior to them. Jesus showed kindness to the “other”. In fact, Jesus identified with the “other”.

He was despised and rejected by mankind, a man of suffering, and familiar with pain. Like one from whom people hide their faces he was despised, and we held him in low esteem.
Isaiah 53:3

Whenever I hear people say “the Bible is clear” about something, I immediately distrust them. The Bible is a lot of things – a lot of wonderful things – but it is not clear about a whole lot. If it was, scholars and theologians wouldn’t have been dissecting and arguing the texts for centuries. There wouldn’t be so many translations and so many denominations. There would have been one uniform way to worship and to follow and to live. But there’s not. That’s why, when all else fails, we have to fall back on love.

You have reacted on "Church Signs" A few seconds ago