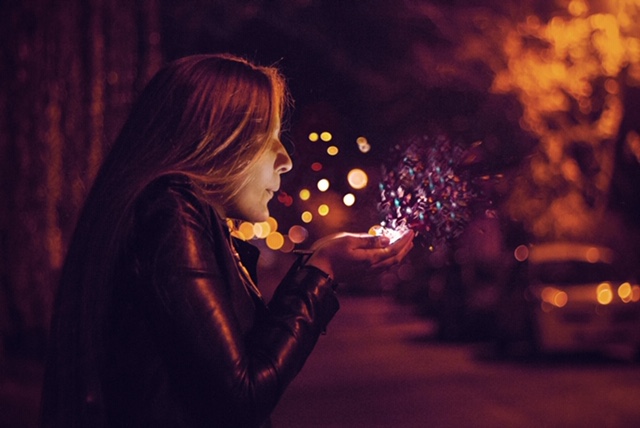 Since I was a child, I saw the world through rose-colored glasses. I’m not sure whether it was the Disney movies, my imagination, my parents, or my genetic makeup, but I saw everything as a fairy tale narrative. I believed in magic far longer than most other kids my age. I believed in true love and soul mates and discovering I was actually the Princess of Genovia. I believed my stuffed animals had feelings and my Aladdin rug could actually fly. I believed that I could write a letter to God, put it in the trunk in my room, and he would read it. I found wonder in everything. Everything was new and exciting. There were adventures around every corner. There was magic just waiting to be found.

But, as it does, life happened. The spark of wonder and magic got smaller as I got older and began to experience sorrow and disappointment. I wasn’t a princess. Stuffed animals weren’t sentient (and honestly, thank God because that would be terrifying). My Aladdin rug never flew and the letters I wrote to God were always in the exact same place every morning.

My 5th grade boyfriend broke up with me on my birthday.

I didn’t make the cheerleading team in 7th grade.

I started having panic attacks in 10th grade.

By my senior year, I wore cynicism like an armor. I broke up with my boyfriend the summer after we graduated, and I remember sitting in my best friend’s driveway and telling her I didn’t think I’d ever get married because I was just never satisfied. I did one of those MySpace bulletins and one of the questions was, “What is one word you would use to describe yourself?”

My answer was insatiable.

Ugh, I was so miserable. It’s embarrassing.

How did I get this way? I found a journal entry of mine from 2013 that basically says, “I had such a fire in me for so much of my childhood. But now it’s out.” Talk about depressing.

Inside every cynical person, there is a disappointed idealist. – George Carlin

I had become such a cynic that I barely recognized myself. Everything was stupid. No one understood. Nothing ever worked out. I was the eyeroll emoji personified. And it got to the point that I was bored with and annoyed by my own damn self. LET PEOPLE ENJOY THINGS, HALEY. What was my problem? When I look at my Facebook memories I get that hot feeling of shame as I read all of my cynical, bitchy posts from years ago.

I’m not sure exactly when the shift happened; all I know is that it was a slow pilgrimage back to myself. Back to the magic.

Rachel Held Evans said that cynicism is an effort to numb ourselves to the pain of disappointment. But it backfires. Instead it numbs us to empathy, joy, & love.

I was trying to protect myself the best way I knew how from the sorrow and the heartbreak that comes along with being a human. Hint: you can’t. If you numb yourself to sorrow and heartbreak, you’re numbing yourself to everything. There’s no such thing as selective emotional numbing. If you don’t allow yourself to feel the bad, you won’t have the capacity to feel the good.

Think of our emotions like a pendulum swing. When we put on heavy emotional armor, our pendulum can’t swing too far to the negative side, but it can’t swing very far to the positive side either. The more emotional armor we take off, though, the more we choose to sit with it instead of numbing it with our drug of choice (alcohol, work, sex, cynicism…), the further our pendulum is able to swing on both sides. Yes, we are opening ourselves up to hurt and sorrow and heartbreak, but we are also opening ourselves up to excitement and wonder and joy.

Not the joy of our childhood, though. That’s a magical joy, of course, but it’s a naive joy.

The joy that we feel when we decide to shed our armor of cynicism is a wise joy. A Christlike joy. A joy that understands the horrors and the grief and the tragedies of this world and still chooses to feel it all. Every last bit. It’s what it means to be human, after all.

Rob Bell says that cynicism is both easy and lazy. I’d also like to add that it’s cowardly.

It’s easier to choose cynicism than to choose hope. It takes no energy or effort to say “Oh, that’s just how things are. They’ll never get better. That’s life!” It’s easy and it’s lazy and it’s cowardly. It’s harder, braver, and takes more effort to say yes to life – to all of it. The good and the bad. The comfortable and the uncomfortable. The magic and the mundane.

If you’re feeling especially cynical lately, let me first start by saying that I feel you. It’s my go-to when I need emotional armor. I have to intentionally make myself put the armor down. If you make a daily habit of laying your armor aside, though, you’ll eventually get to the place where hopeful is your default setting. That is where the joy lies. Joy that knows that even though things might get shitty, there is still good that exists. Cynicism stubbornly says there isn’t, but cynicism is a lie. There is so much that is sacred and wondrous and delightful and good.

My son, Law, has been one of my personal guides to laying my armor of cynicism aside. Law continues to teach me to look at everything with wonder. I get to experience everything for the first time all over again by watching him experience it. I get excited when I see a train or fireworks or a fountain because I know he’s about to lose his freaking mind over it. I’m frequently pulled out of whatever adulting my brain is trying to do by hearing squeals of “MAMA! A TRACTOR!” or “MAMA! A BIG HUGE GIANT TOWER!” or “MAMA! A RAINBOW!” Things I would never have thought twice about. It’s important to pay attention. Hope makes us pay attention.

Don’t be afraid to be a fool. Remember, you cannot be both young and wise. Young people who pretend to be wise to the ways of the world are mostly just cynics. Cynicism masquerades as wisdom, but it is the farthest thing from it. Because cynics don’t learn anything. Because cynicism is a self-imposed blindness, a rejection of the world because we are afraid it will hurt us or disappoint us. Cynics always say no. But saying yes begins things. Saying yes is how things grow. Saying yes leads to knowledge. Yes is for young people. So for as long as you have the strength to, say yes.

Drop your armor of cynicism and say yes. That’s how you rediscover the magic.