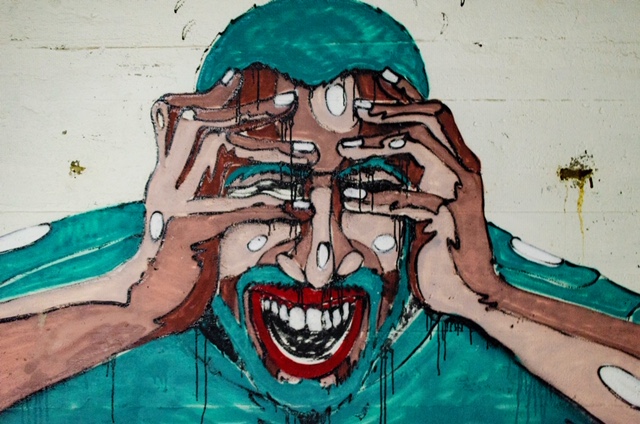 It’s strange having a panic attack while surrounded by people. I’m experiencing something so private and so personal, but unless I externalize it, they are completely unaware. It’s almost an art to be able to hide it – to train myself well enough to function in front of others to the point that, if I do reveal to them the nature of my anxiety, they reply, “I had no idea.”

If you’ve never experienced a panic attack, they are almost impossible to explain. But I’m going to try.

Panic attacks are often pre-verbal, animalistic, and very, very private. No two people experience a panic attack in the same way. It’s not always rocking back and forth in the fetal position (though I’ve been there). Some people zone out and become almost catatonic. Some can’t breathe. Some have chest pains. Some become aggressive. What happens to all of us, though, when we have a panic attack is the feeling or thought that either something catastrophic is about to happen or we are going to die. And as far-fetched as it sounds, I can assure you that it is very, very real.

It often starts with feeling dizzy or woozy. The room doesn’t spin, but I feel off. Like the earth is tilting. My blood runs cold and I get a chill up my spine. I feel like I’m going to pass out. The thoughts that run through my head are almost incomprehensible – a steady stream of screeching and wailing. My brain flips its switch and I go from being able to think and function logically to oh god I’m going to die I’m about to die I have to get out of here I’m going to die this is it oh god oh no no no no.

I have to sit down, or I have to walk, depending on how close I am to fainting. Typically, my fight/flight/freeze response is flight, so I usually want to get the fuck out of there – wherever “there” is. I want to be alone, but I’m terrified of being alone.

No one can see me like this.
What if I pass out? What if I die? Will anyone find me?
But what if it’s just a panic attack? Then you’ll feel stupid.
Should I get help? Should I call 911?

I walk out if I can, and if not I fake needing to go to the bathroom and text Chase.

I’m about to pass out. I don’t know what to do. I’m freaking out. Can you come home?

I’m crying by this point and I’m having a hard time taking a deep breath. I hug myself and rock if I’m sitting down or I shift my weight from leg to leg if I’m standing up. My throat is closing. Everything is too loud and too bright. I’m pinging between sheer panic and despair. When I’m on the panic side of the spectrum, I go off instinct. My instinct is to escape. When I’m on the despair side of the spectrum, I’m able to form thoughts. Real shitty thoughts.

What is happening? Is this a panic attack or am I dying? Am I going to faint? Do I have a heart problem? What if it’s something really bad that’s undiagnosed? I haven’t eaten anything in a few hours, maybe it’s diabetes. HOW CAN EVERYONE ACT SO NORMAL CAN’T THEY SEE I’M DYING???

I flip flop between panic and despair for the duration of the attack. It never lasts longer than 10 minutes, but the effects of it last the rest of the day. I’m exhausted, but I’m on guard in case it comes back. I’m wary. Is this just a random panic attack or am I about to go through another season of hell?

I know it can be hard to imagine a panic attack if you’ve never had one. It gets portrayed in a humorous way on tv, usually involving breathing into a paper bag, and it can seem a little dramatic. I’ve had someone tell me that they used to think people who had panic attacks were weak (why couldn’t they just pull themselves together and snap out of it?) until they had one themselves.

If you’ve never had a panic attack, first I want to thank you for reading this far. Either you love someone who has had panic attacks, or you’re genuinely curious, and both make you an awesome person. Let me paint a picture for you.

Imagine you’re driving your car in the mountains of Tennessee. It’s a sunny day and you’re listening to your favorite band as you steer your car around the bends. You’re enjoying the ride and thinking about your family or friends or whoever you’re going to see. Then, out of nowhere, your power steering goes out and you plow straight through the railing. You grab the e-brake just in time, but the front end of your car is hanging off the mountain and the back tires are hanging by the railing you ran over. One wrong move and your car will slide off of the edge toward a 200 foot drop, and you will die. Do you try to climb out of the back? Do you sit still and wait for rescue? Do you accept your fate? What do you do? The car seems to be sliding forward slowly. Or is it? It’s hard to tell. You can’t think. You have to get out of here, but you can’t move. You’re helpless.

This is a panic attack. It comes out of nowhere, usually, which makes it so cruel. We aren’t expecting it. We are living life. Then, in a matter of a second, we truly feel that we are on the brink of death. I can’t stress enough just how utterly real this feels to us.

Our bodies believe we are about to die. Our brains send a flood of adrenaline into our bloodstream. Our heart beats fast, sending more blood to our muscles. Our breathing becomes more shallow, allowing us to take in more oxygen. Our blood sugar spikes and our senses sharpen. Our body is trying to help us confront danger or get out of harm’s way, but it doesn’t realize that there is no real danger.

That’s why panic attacks are so exhausting. We are having a near death experience. We aren’t facing the reality of death, but we are facing our perception of it.

Eventually, it passes. It always does. We are left feeling drained or numb or depressed or ashamed. I tend to get angry.

This is BULLSHIT. I HATE this. Why does this keep happening? I was a therapist, for Christ’s sake. I should not have panic attacks. FUCK THIS.

We recover, though, and that’s exactly why people who have panic attacks are warriors. We fight battles every day. We know the nature of The Beast. We don’t always know when he’ll strike, but we know that we will survive whatever he throws at us. We’ve faced death in our own way, and it hasn’t beaten us yet. We survived the last panic attack, and we’ll survive the next one. We have no choice.